Back in 1884, our founder Saul Solomon began serving the people of Dunedin and Otago. He was known for his strong work ethic and attention to detail. Just like Saul, today our team works harder than ever with experience and accuracy to help our clients realise their goals. 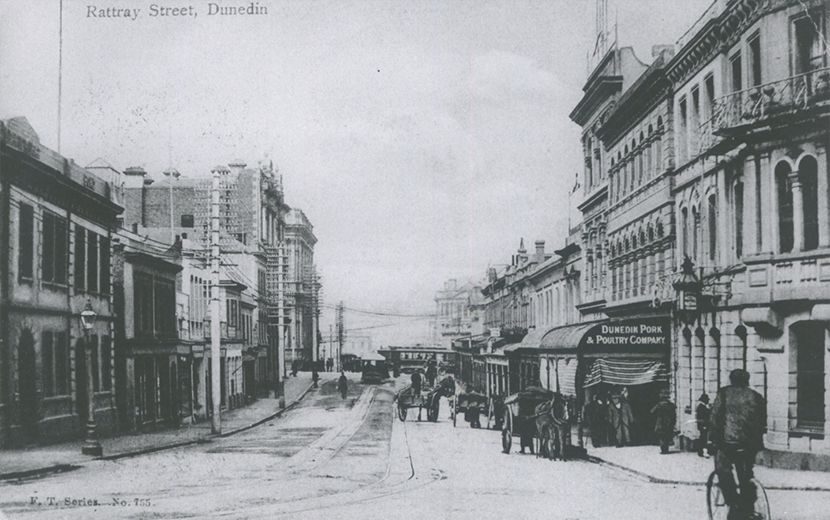 The streets of Dunedin alive with speculation and optimism, gold and farming are the topics of the day.

The History of Solomons

Solomons was formed in 1981 by the amalgamation of Solomon Gascoigne Quelch McKewen and Fogarty, and Moore, Aitken and Tohill. Both these firms had long and fairly complex histories. The first is the older having its origins in 1884 when Saul Solomon commenced practice on his own account. In 1900 he was joined by Albert Ernest Gascoigne in Solomon and Gascoigne. This soon became Solomon, Gascoigne and Hay. William Grant Hay left in 1917 and the previous name was used for four years until John Sinclair joined the firm. In 1924 it became Solomon, Gascoigne, Sinclair and Solomon when Saul’s son, David, became a partner. Gascoigne died in 1928. In 1930 Robert Sinclair became a partner. Saul Solomon died in 1932, his son in 1951, and R G Sinclair in 1960. In 1961 John McKewen purchased the practice which became Solomon, Gascoigne, Sinclair and McKewen. Later that year Terry Fogarty became a partner. In 1968 Bert Quelch (who practised on his own account in Dunedin and Mosgiel since 1932) amalgamated his practice and his name was inserted in that of the firm.

Moore, Aitken and Tohill dates from commencement of practice on his own account by Frederick Zwingle Moore in 1900. In 1901 his brother William Luther joined him in partnership. In 1908 Moore, Moore and Nichol was formed when Robert Nichol joined. F Z Moore died in 1931. The partnership between Nichol and W L Moore was dissolved in 1933 and the latter formed Moore, Dawson and Aitken with Wilford George Aitken and Frank Cole Dawson. Dawson was killed in the Second World War. The firm became Moore, Aitken and Tohill in 1959 when Hugh Tohill was taken into the partnership. W L Moore retired in 1961 having completed sixty years in practice and Aitken died in 1965. Mr Tohill then practised on his own account until the amalgamation.

In 1981 Mr Quelch died and Mr Fogarty was appointed to the District Court Bench in Christchurch. The firm amalgamated with J S D More and Son (David James More) and thus had the distinction of having three partners as presidents of the Otago District Law Society in consecutive years: John McKewen (1979), David More (1980), and Hugh Tohill (1981). Lachlan Ross joined the partnership in 1981 and the firm changed its name to Quelch McKewen Tohill & More. In 1982 the firm took over the practice of Barry James Thomson. Hugh Tohill retired in 1984 and the firm acquired the practice of Hartstonge and Walsh (Maurice James Walsh) later that year. In 1990 the name changed to Solomons and incorporated the practice of Sievwright James Stark and Borick late in the year. David More retired from the partnership to practice as a barrister sole in 1995. John McKewen died in 1998. In 2001 the firm acquired the practice of Frederick L Duncan. Devon Miller joined the partnership in 2011, becoming the first female partner in the firm’s history, retiring from the partnership in 2015.